YESTERDAY: January’s nearly over and, due to the erratic weather, we hit our beloved sledding hill for the first time all winter.  The snow was sparse but slippery enough to get downhill! 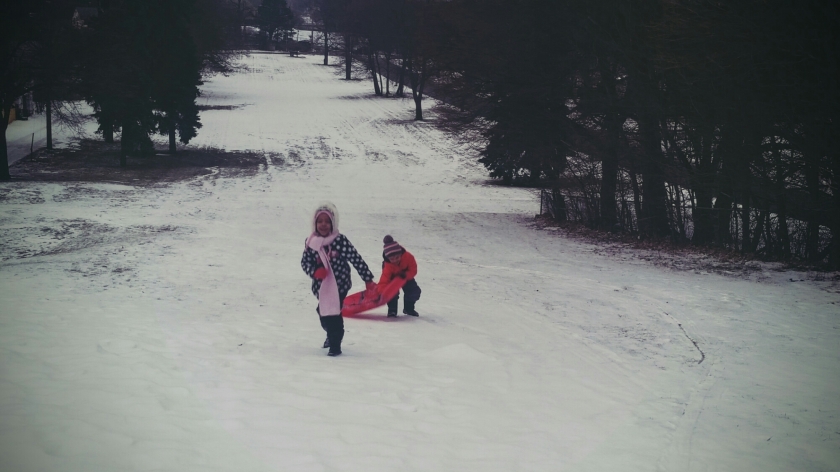 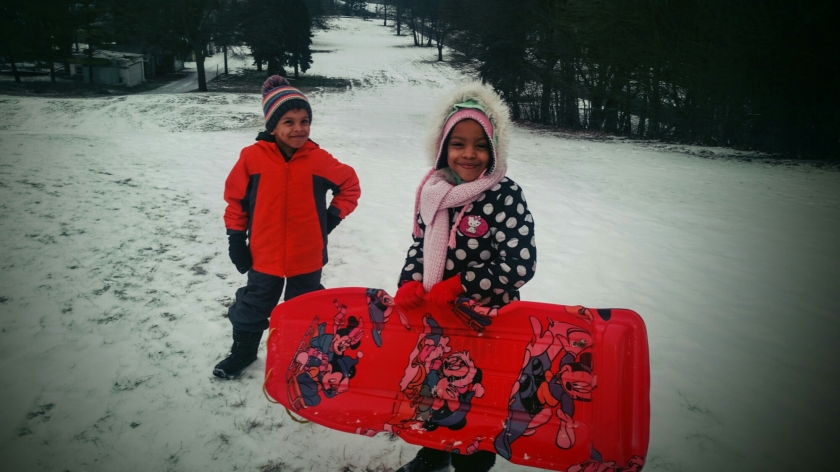 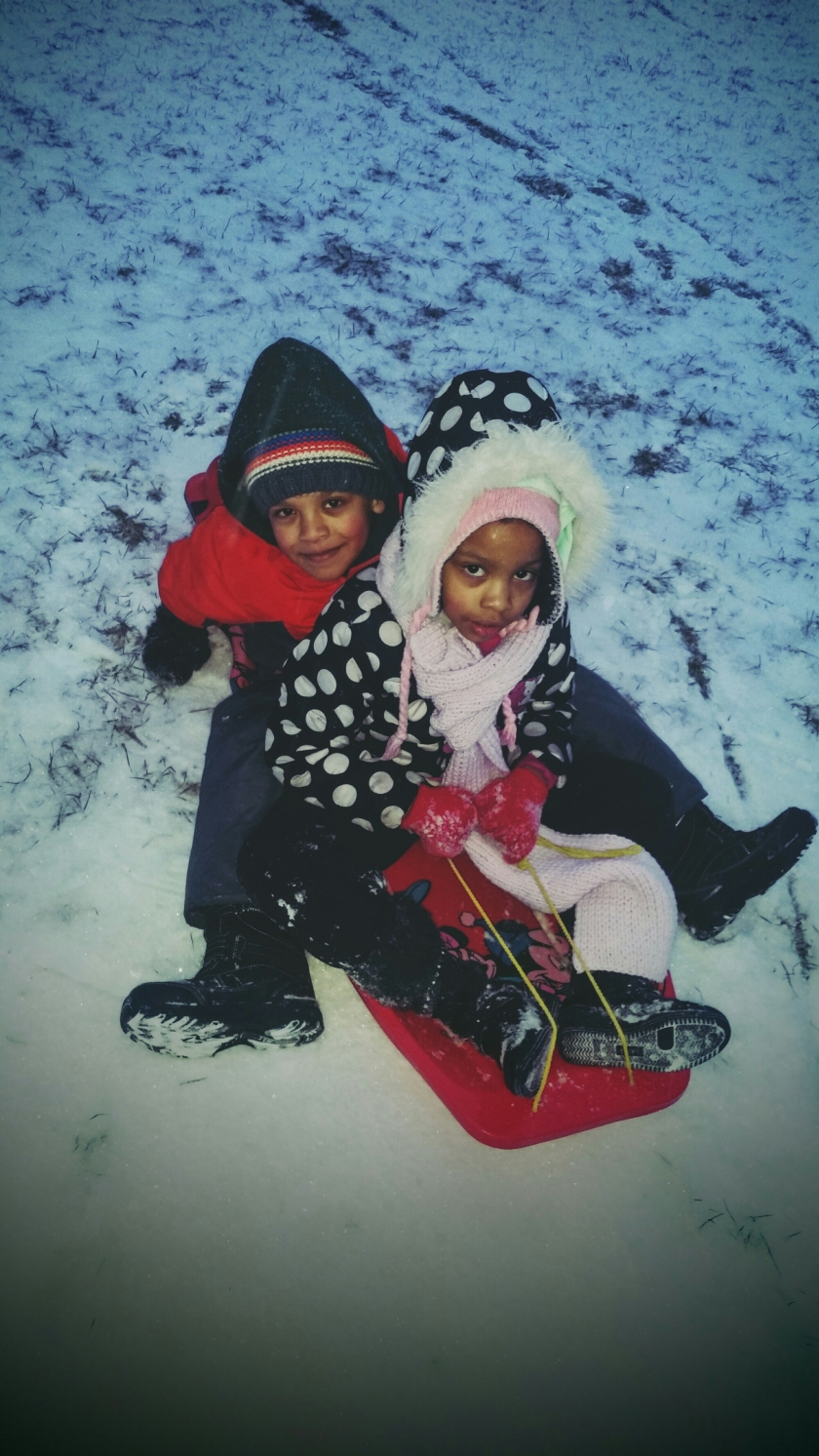 TODAY: The kiddo wrestled his coat off through the seatbelt and went bare-armed (against Dad’s grumblings; meanwhile, I’m all “who needs the fight? g’head and test it for yourself”) for the short walk between the car and the building! 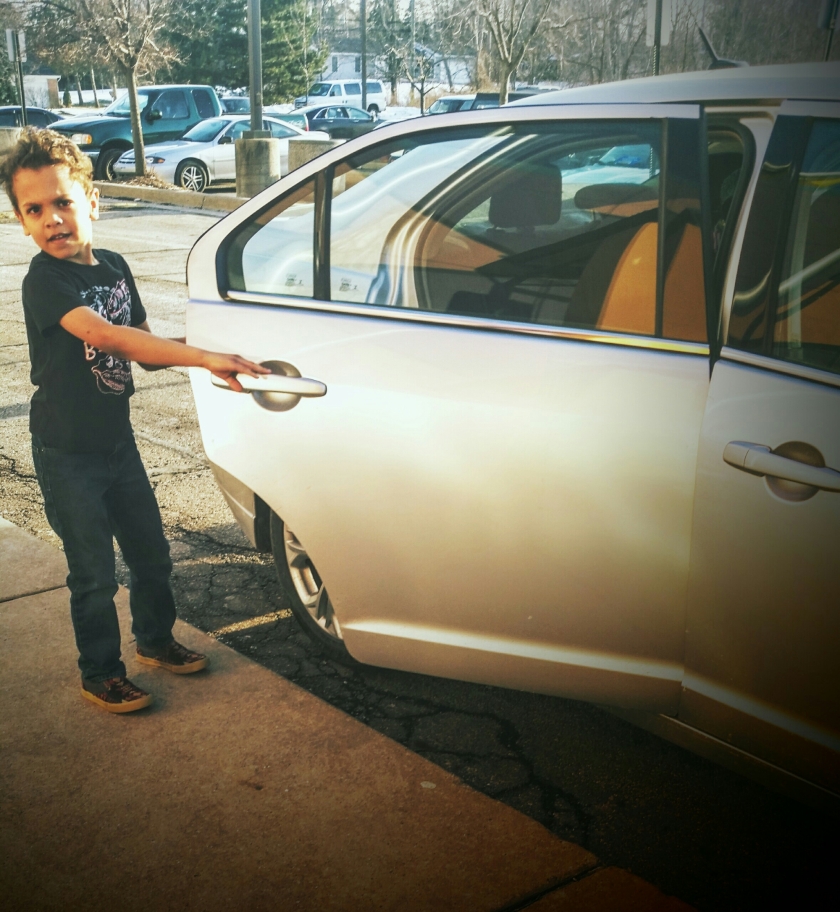 We were standing in the grocery aisle when K said it.  I turned to look at my not-quite-four-year-old son and, with disbelief, asked, “What did you say?”

My jaw dropped as if K had actually uttered that other 5-lettered curse word. Seriously, how did he even learn about the concept of boredom when it’s not in my vocabulary?! (The answer popped up between my silent bouts of huffing and teeth-sucking: TV or D-A-D, of course!)

After I recovered from the shock, I assured him that I understood shopping wasn’t his top choice of activities (despite his previous excitement over getting to cruise around in the plastic car attached to the shopping cart). Then I immediately told K he was not allowed to be bored! Seriously. He’s too young and imaginative: this child of mine who nearly goes into a trance over the simple joy of pushing his fleet of cars around the bed for hours on end—molding the sheets and blankets into mountains, ramps, and parking lots.

I mean, have mercy on your dear mom—a/k/a your human jungle gym, running buddy, puzzle partner, play date coordinator, and master problem solver who does her best to engage you in stimulating activities to help you burn energy and learn new/interesting things. This is no small feat on a regular day. Now add the relentless surge of winter storms from the Polar Vortex, which has limited the time we can play in the snow, and the battle against cabin fever can become excruciating. Oh, and, mustn’t forget to multiply it by occasional bouts of must-have-Mommy-by-my-side-at-all-times. EXHALE.

Since then K has tossed out the b-word a few more times. Thankfully, it’s only taken a little bit of quizzing about his ideas and feelings to divert the restlessness toward a satisfying creative outlet. But, man! I had really hoped we would have a few more years before our kid started complaining about boredom. 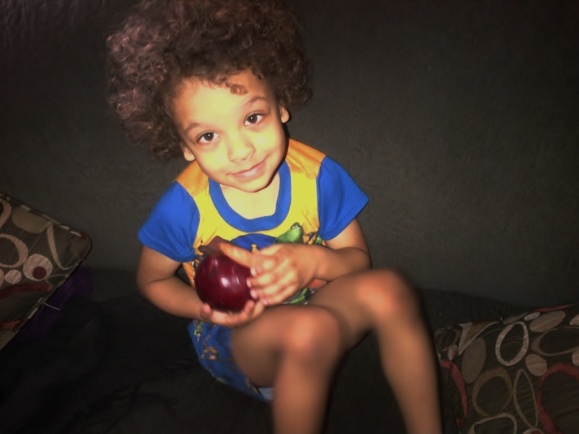 cuddle with a carrot + a “poma-granny”! 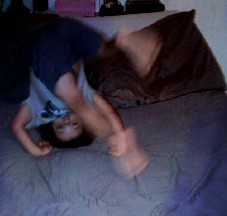 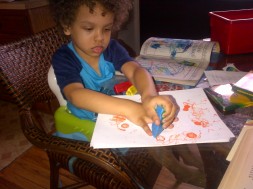 learn to trace his hand 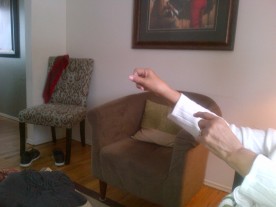 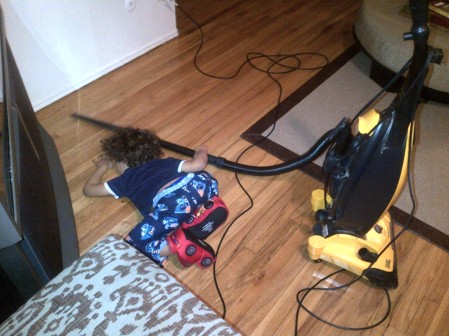 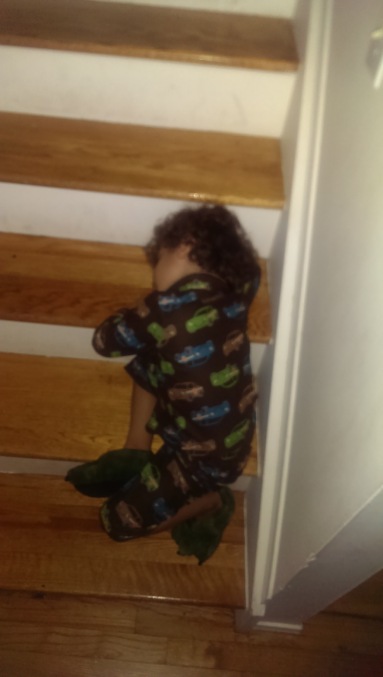 sleep, in the middle of the room, unfazed by surrounding noises 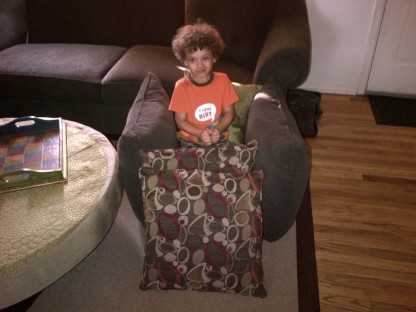 take mommy for a ride in the pillow truck!

convert the truck into a cave

get ready for take off 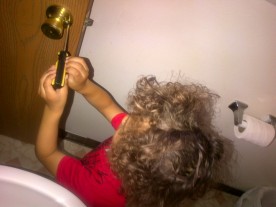 I knew I’d have to make peace with winter when I decided to move back to Michigan 10 years ago (from NYC, which in my 9-year stint as a resident, had milder weather. Hands down. The true test: my nose hairs never once sprouted icicles!) As a kid, I loved everything about it. But my intolerance for snow, bitter chill, and grey skies–sometimes from October to April–grew with each year of adulthood. Maybe it’s genetic–my Caribbean roots or my anemia!

So I chose to embrace it rather than to suffer or grumble through the inevitable teeth-chattering and shoulder-scrunching. Warmed by my childhood memories of gliding, stumbling, and laughing with family and friends as we looped around our now-defunct outdoor ice rink for hours on end, I bought ice skates and made weekly visits during the mid-day open skate. I learned to breathe and relax my arms instead of tensing all my muscles in a futile attempt to fold deeper into my goose-prickled skin. I was slowly becoming weather-resilient!

By the time I became a parent, I was committed to making sure my son would be an all-seasons kid. So as long as the temperatures don’t veer toward the danger zone, we bundle up for regular walks and romps in the snow.

K got his very own shovel as a gift from his Papa! It was as much a gift for Daddy too since he no longer had to trade turns with K while clearing the walkway.

My Caribbean father, who has lived in Michigan for all but two of the nearly 40 years he’s been residing in the States, went sledding for the very first time in his life! It was a joy to watch K and his Papi make such memories…and a trip to see my dad spend hours editing the video he shot of our sledding adventure that day! #BucketList

K is forever pulling out my yoga mat to “exercise” or spontaneously busting a yoga pose. We love Legs-Up-The-Wall (Viparita Karani), especially when settling down for bed. So today I thought it be fun to enlist his help (and stave off cabin fever) to create a fun photo to include in an announcement about my class cancellation.

It was 17° F on New Year’s Day, and my practice still beckoned me to honor my commitment to get sorted, settled and centered–body, heart, and mind–through my walking/running meditation.

There’s a special stillness in winter that I deeply appreciate. Fewer people venture out when the temperature dips below 30 °F, and only the bravest dare to “play” if the sun’s not offering some illusion of warmth. Slate grey sky. Stark white snow. A solid path along a river flowing beneath a thickening sheet of ice. Scraggly winter-stripped branches and a frizzled ridge of vegetation mark the border between shoreline and water.

I feel enveloped and penetrated by this rare moment of quietude. The sensation of refuge arises to warm my muscles–fueling each step or sprint.

I am reminded of the “witching hours” when I’m awakened by the moon. Fully alert and energized, I sit or lie down to meditate, abiding in breath, or write out my contemplations in my journal. Reprieve in a house that is typically buzzing with the energy of my 3-year old daredevil and the electricity of appliances and electronics in constant service. A murmur and sweet sigh from my son. I pause, instinctually ready to respond to his call. I relax once more. A startling chainsaw-like snore from my mate. I pause again, listening to the pattern. If it continues, I move to another room.

These sacred spaces–a park in winter, a house in slumber–magnify the wonder and magic of my mindfulness practice.

sidewalk snow angel in the making

a dusting of snow is enough for a sidewalk angel 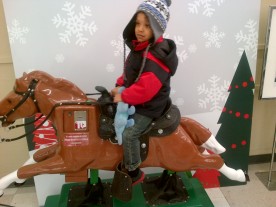 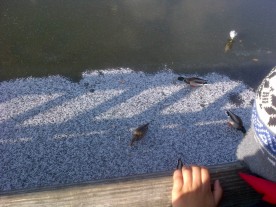 MAGIC: A parent’s chore is a child’s greatest joy!

Here, K got in on the shoveling fun started by his Papa and Daddy…and made a game of switching shovels every few moments.

MINDFULNESS:  Whenever I sweep the floors or scrub the tub, K begs to assist. I gladly pull out the extra broom so he can help clean up his cracker crumbs and give him the scrub brush and allow him to jump naked in a baking soda-coated bathtub to muscle out the bubble bath scum.

While K is demonstrating autonomy and initiative, I have the opportunity to nurture seeds of cooperation (all along chirping The Wonder Pets’ “teamwork” song) and an appreciation for taking care of his home and belongings as well as those of others.

So I say, let start ’em young!  Guiding him through a task may take a few extra minutes. But the songs, smiles, and laughter—evoked by his proud cheers of “I did it!”—truly lighten the load.