Give a boy a garden hose… 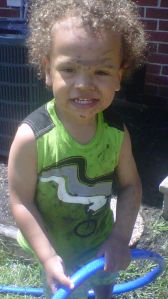 I finally prepared my garden over the stretch of a week—turning the earth over (Shhh! I surprised my semi-bug-phobic self by apologizing to the displaced insect life and asking for their help in growing our garden), watering the plot, contemplating the layout and selection of plants, and interplanting flowers and herbs for the first time.  All the while, my dirt-loving-Earth-Day-born 2-year-old was giddily digging right alongside me.

By the end of the day, K was a pro with the garden hose and everything was a fair target.  Including me, of course!  I even had to negotiate time with it.  He’d reluctantly hand it over, whimpering “my hose” and half-heartedly picking up the hand shovel or cultivator until he could get the hose back in his grip. 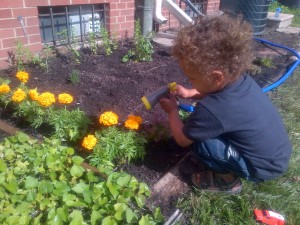 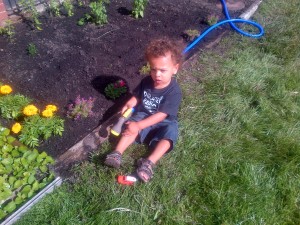 While at the park one afternoon, he played with two little girls who were trying to make an airplane out of candy wrappers strewn about the playground. I pointed out other scraps they could use, remarking how cool and clever it was that they were recycling garbage into art.  Suddenly, K starts hunting down trash and throwing it away!

I have no doubt that our time together in the garden cleaning up debris, tilling, weeding, planting, watering and admiring our efforts have planted in him the seeds to be a steward of this earth. 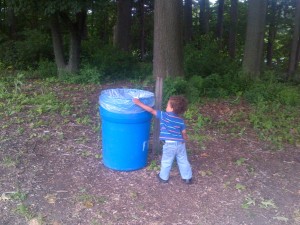 First blooms of the Snapdragons

Yesterday, I was so excited to see the first of the snapdragons flowering!

The gift of the whole universe: 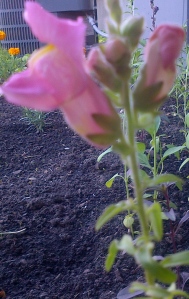 …A hose, a toddler’s enthusiasm and wonder,

Our hands, our breath, our laughter, our smiles.